I went a little Halloween-crazy this year.  Make that a lot crazy.  Like, I might as well have been hanging out with my blue security blanket in a sincere pumpkin patch waiting for a mystical vegetable to show up.

I completely blame the after-effects of wedding brain.  During my year+ of wedding planning, I always had one craft project or another into which I could funnel an absurd level of time, energy, and money.  I would have told you when the wedding was over that was something I wouldn’t miss.  But like summer heat or being in school, wedding crafting is one of those things you’re delighted to be relieved of at first but miss terribly after a few months without it.

So I filled that void with an ambitious Halloween costume.  The Evaline, the ridiculous Halloween party we go to every year, had a board game theme this year.  So I attempted to make a dress that also functioned as a playable Scrabble board.  Spoiler alert: Emphasis on ATTEMPTED.  I totally failed.

I bought this Scrabble fabric

online, carefully cutting out the bonus squares and using fusible web to create a Scrabble board pattern on a dress.  Then I super glued clear sew-on snaps to the backs of a set of Scrabble tiles.  The trouble started when I started to sew on those snaps, because it was a VERY slow-going process.  So I told myself I’d only sew on a specific pattern of snaps for the front of the dress, so that I’d only have to sew all 225 squares on one side of the dress.  But I was at my fastest sewing on one snap every five minutes, which would have taken about 18 hours of non-stop sewing to complete.  Time I just didn’t have, because I was also helping with party set-up again this year.

So I started to super-glue the snaps onto the dress.  At first, this seemed to be working great.  Sure, I completely glued my fingers together multiple times. [Sidebar: this

is the greatest super glue on the planet, and it is most easily removed from skin by using hand lotion with lanolin in it! You're welcome.] But then I was running short on time even with my new corner-cutting strategy. I started to get a little sloppy with the super glue. And the snaps would no longer snap.

So I had a good “I just wasted so many hours and dollars” cry, Collin tried his damnedest to fix it (he actually worked out a reasonable fix involving a power drill, but I was more than ready to throw in the towel). It helped that my other Halloween costume turned out better than I could have hoped: 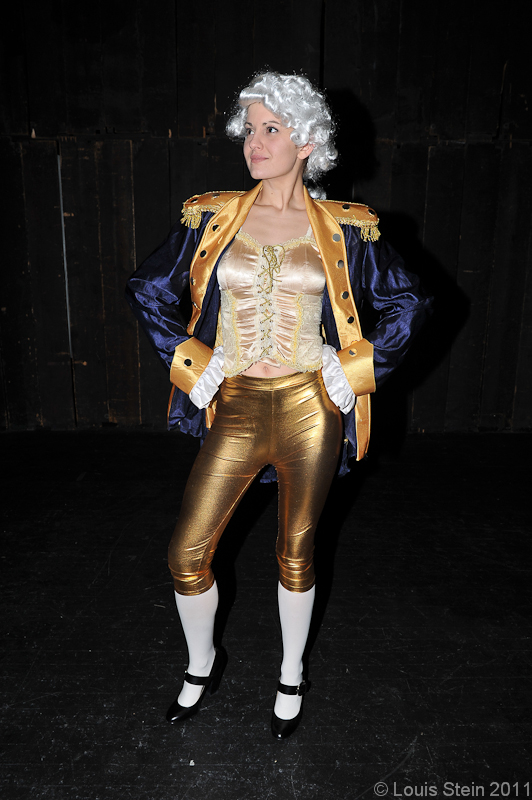 Sexy George Washington was a big hit, and as an added bonus, it’s one of those rare “sexy” costumes that is warm. When it snowed Saturday morning, the mourning period for my Scrabble costume was cut dramatically short by the warm promise of a jacket and a wig.

And then there was a couple with a playable Scrabble costume at the Evaline (the dude was the board, the chick was the selection of tiles. They used velcro, and fake tiles. They’re smarter than me!) So I totally dodged the inferior-version-of-a-clever-costume bullet. It was a Halloween miracle!