I ran my first official race this weekend.  When it comes to joining the Cult of Running, your first race is along the lines of being allowed into the forbidden barn or being told your first parable about Xenu.

But my first race was so unpleasant it might have done half the work of deprogramming me.

Let’s start with the weather.  I started running over the summer.  Running through the soup that Pittsburgh calls air during August could suck, sure.  Collin would tell me, “Just wait until fall.  Running in the fall is awesome.  50 degrees is perfect running weather.”  Turns out, he’s right.  The ten-mile run we did a few weeks ago was definitely aided by the cool weather, which wasn’t too chilly to distract me but enough to motivate me to keep moving.  But Pittsburgh only gets about two weeks of those silly “transitional” seasons.  In fact, our city motto is “Pittsburgh: Where Autumn is Ephemeral.”  [Okay, okay, it's actually Benigno Numine, which means "with the benevolent deity."  Factsy out.]

So when I opened the door on Race Day to see huge snow-globe-style chunks of frozen water falling in the sky, I wasn’t particularly surprised.

I put on my brand new thank-God-I-allowed-myself-to-be-sucked-into-a-Target-spending-spree running gloves and my I-don’t-care-if-it-hides-half-my-costume running jacket and tried to suck it up.  But the race started 15 minutes late because of a felled tree in the course and waiting outside near the start line without running to stay warm sapped most of my ability to stay positive. 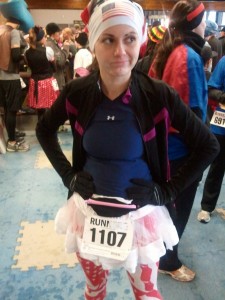 And then there was the course itself.  The Terrifying 10K’s slogan is “the first hill’s a killer,” so I guess I can’t say they didn’t warn me.  Wait, yes I can, because it isn’t just like there was a steep hill for the first half-mile of the course (although there WAS), the entire 6.2 miles was a series of rolling hills.  Steep enough that running downhill wasn’t a break or chance for recovery so much as an “Ow, my quads!” experience.

Finally, it felt like everyone was passing us.  I want to say the weather scared away the other novice runners or at least diverted them to the 5k course.  Because otherwise I am the slowest runner in the Greater Pittsburgh Area.  I know it shouldn’t matter, that I should only be racing against my internal desire to quit, but this was my first race and I haven’t learned that skill yet.  So being passed and never passing was definitely a further demotivator.

Despite all of this and literally wanting to roll down the snowy banks of North Park to GET AWAY from this horrible race before we’d even hit the second mile marker, I finished the race.  I ran the whole thing without any walk breaks, which was my goal. I was only able to do it because of Collin’s constant support and patience with my misery.  I also got a huge mental boost when my friend Josh ran into us around the 4th mile (he was in the middle of a 20-mile run in his training for the Philadelphia marathon).  Around the last half mile, I was insisting that after finishing this race I’d never run again.  A few days removed from that moment of abject misery, I want to say it isn’t true, but I’m going to need some kind of re-motivation to get out there again.

Part of me thinks I need to run another official race ASAP so I don’t cement this idea that race = misery too firmly in my brain.  Part of me wants to pull a Baby Lickity-Split and insist that I’ll Go It Alone for the rest of my running life.

But I still passed this milestone, no matter how miserably. I’m trying to hold on to that and pull whatever tiny amount of pride I can from it.