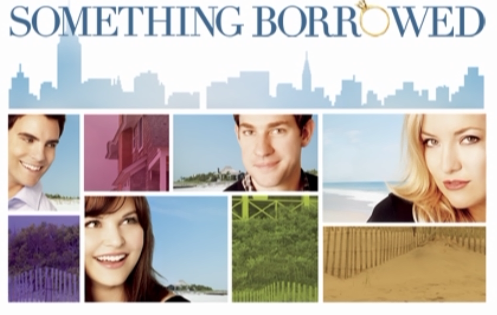 The first people other than Collin I saw after getting engaged were my Law Review girls.  I came into the board room in my Marriage Is So Gay engagement t-shirt and my ring and hugged everyone, even the 2Ls I didn’t really know, and then everyone started telling me I should read the Something Borrowed

So I downloaded the Kindle sample, which takes you right through the point where the main character boffs her best friend’s fiancé.  Adorably naïve just-engaged Robin didn’t want to read a story about a doomed engagement.  [I then proceeded to watch as many wedding movies as possible, even though they are virtually all about doomed engagements.]

But now, safely on the other side of both my wedding and law school, I sat down to watch Something Borrowed, the film adaptation.  And found myself promptly wishing I had a drink in my hand.  Because man, this story is some Seriously Sad Shit. Something Borrowed is the most depressing movie I’ve seen since—since I don’t know, Dancer in the Dark?

You see, there’s a fundamental problem with love triangle stories.  The usual approach wedding movies take is to make one party the Obvious Loser.  The person who doesn’t deserve, isn’t right for, and/or doesn’t really love their intended.  The problem with this model is that you usually wonder why that couple ever got together in the first place, or, you know, not only got together but decided to go ahead and GET FREAKIN MARRIED. [The hand wave here is supposed to be that the would-be groom hopes his engagement will alleviate his mother's chronic debilitating depression.  Because this movie is trying to do for chick flicks what Schindler's List did for WWII movies.]  But I suppose most people don’t mind suspending their disbelief about the unlikely union between the original pair because it’s better than feeling bad for the person who ends up jilted when the leads break up their relationship.

I could never entirely sort out if Something Borrowed was trying to take that course or trying to subvert it.  Kate Hudson plays the cheated-on bride-to-be, Darcy.  On the one hand, Darcy is presented as a moderately horrible human being.  She’s shallow and self-involved.  She’s loud and brash and appears “fearless” even though it is patently obvious that her body is composed of as much insecurity as it is water.  But she also seems really, really FUN.  And kind of delightful to be around.  She reminds me of some of my best friends.  Heck, she reminds me of ME, in a lot of ways.  The only actually morally wrong thing Darcy does is cheat on her fiance.  Which in the ethical universe of Something Borrowed absolutely cannot be a deal-breaker, right?

Then there is Rachel’s bitchy gay best friend, played by John Krasinski, only he isn’t gay (except for when he’s trying to scare off Claire, the Stage 5 Clinger in the group).  He’s just really catty and mean.  He’s straight, and better yet, secretly in love with Rachel, because otherwise the movie wouldn’t hit all of the greatest hits in my history of interpersonal pain. And finally, Marco, the obnoxious man-child who impregnates an engaged woman (CAN YOU GUESS WHICH ONE?).

So we can either decide all these people are monsters and fail to care about them, which makes this movie really boring and irritating, or we can see them as complicated, well-rounded, human characters who have flaws and act selfishly sometimes.  Which, first of all, is not what I normally set out to do when I Red Box an alleged romantic comedy on a Monday afternoon.  And secondly, means I have to be genuinely sad for the characters when their lives fall apart because of their lies and indiscretions and non-connecting love vectors!

I’m guessing all of this worked better as a serious of books (that I will obviously be reading when I am bored in South Africa) than as a two-hour movie.  If I’m supposed to watch these people for two hours, I need to not hate them.  And if I can’t hate them, then I feel terribly sorry for them.  I don’t know if I should be more happy for the winners or sorry for the losers.  I just think about how in real life, people often end up way less than happily ever after.  And that’s not why I watch so many wedding movies, guys.