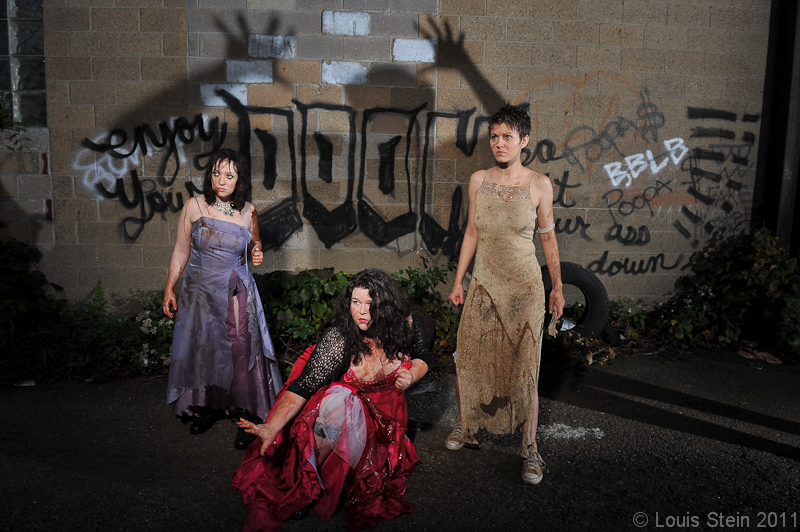 I didn’t trash my wedding dress, and I doubt I will. [Louis says, "Don't you dare; I need it for practice!" Adorable.]  But my friends and I have been talking about doing a trash the dress shoot for… oh… three or four years now.  [Backstory: my friends have photo shoots for fun. I know this is weird, and I also don't care.]

There are two kinds of trash the dress shoots: the understated kind where you wear a fancy dress in places where it might get ruined, like a mossy forest or a rock in the middle of a babbling brook or a dingy abandoned warehouse, but you don’t care.  [Ellie calls this "rock the dress" and she had a great shoot along these lines.]

Then there is the kind where you set out to completely destroy the dress you are wearing.  This was one of those shoots.

I wore a $7 dress from a thrift store out in the boonies that I’d had waiting in my closet for exactly this purpose since at least last October, and maybe the one before that.  It was too short and cheap looking to wear seriously, but looked fancy enough while not restricting my movement in any way, making it perfect for this sort of shoot.  Abby picked up what I am sure was a bridesmaid dress at the Goodwill.  Liz found a discounted pink princess gown at the Deb that some 15 year old out there wore while riding on the back of a classic car in homecoming court.

Our supplies: a bottle of chocolate syrup, a pound of unbleached flour, two gallons of water, and a sharp pair of scissors.  Also honest-to-goodness dirt and mushed up weeds to make grass stains. 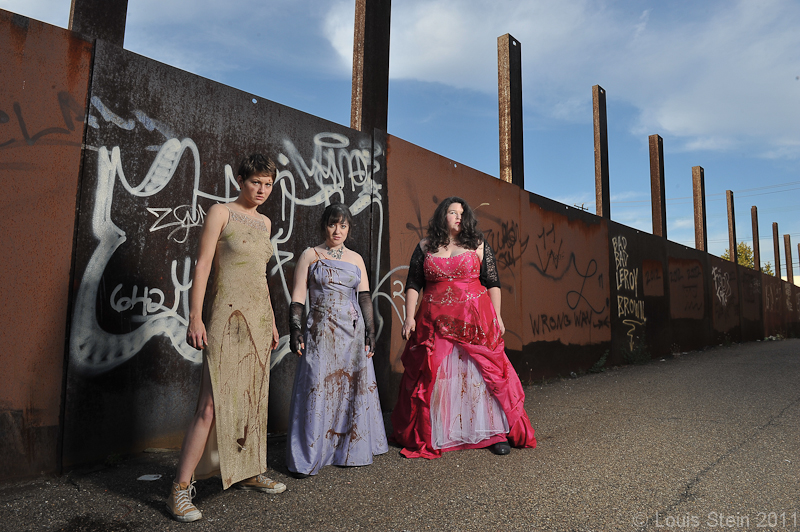 Our location: a truly shady abandoned warehouse parking lot in the 10th ward of Lawrenceville (with broken glass, graffiti, and not one but TWO piles of tires, one in a stairwell also containing a television set).

We trashed our dresses in waves.  First just a little muck.  Then some tearing.  Then another round of dirtying, where we also let our hair and faces into the mess action.  And then a final pouring of whatever remained of our supplies on our bodies, recalling the freshman hazing in Dazed and Confused. 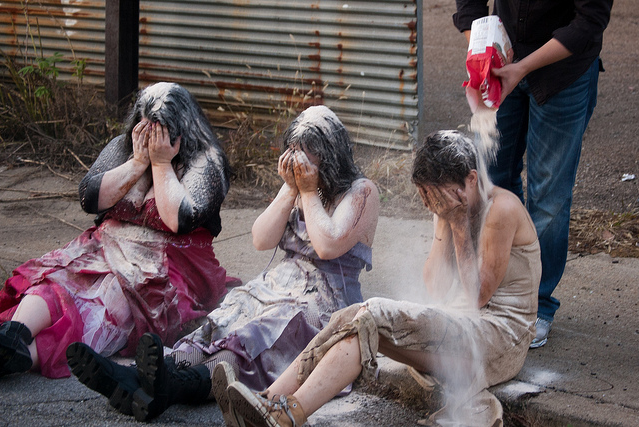 Because this is Pittsburgh, because my friends are improv comedians, because it was the day after Zombie Walk, and because DUH, we quickly formed a narrative that we were fighting for survival during a zombie apocalypse that started during prom, with only enough time to change into more sensible shoes. 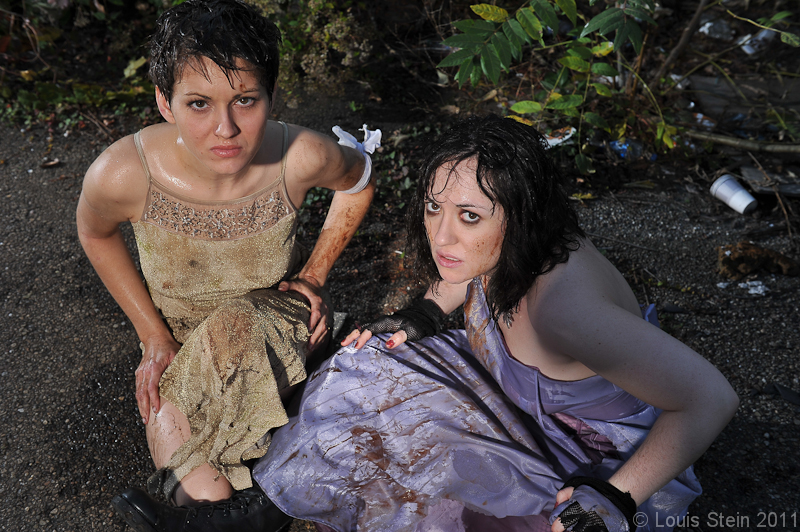 Our friend Chris functioned as our art director, and he was brilliant. It was his idea to turn a strip of the discarded lining of my dress into a bandage, and he always pushed us further when it came to getting mussed. 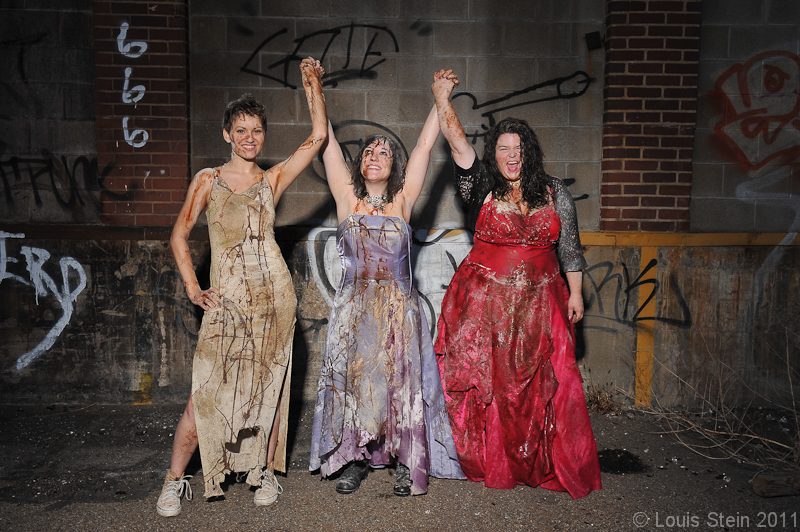 One thing we did WRONG was not prepare adequately for after the shoot.  All we had to clean up was the leftover water and some tissues that Abby HAPPENED to have in her car.  If you trash your dress, remember to bring towels and hand sanitizer!

Seriously, the cleanup sucked.  Getting the wet flour (aka GLUE) out of my hair took about half an hour, and I don’t know if you have noticed this, but I don’t have a lot of hair.  I have no idea how Abby and Liz got their tresses clean.  My skin was not happy with being covered with sugar and flour for hours and then being subjected to a long hot shower.  All of this was well worth it, though.  Getting dirty is fun (remember childhood?), and these pictures are awesome.

In summary: Trashing dresses is FUN.  I think this is a completely valid way to “re-use” a wedding dress.  But see above, any formal dress will do, so this is also a great way to have some more use out of a bridesmaid dress.  If you trash your wedding dress, I highly recommend bringing along your bridesmaids to get in on the messy hijinx with you. Surviving an imaginary zombie apocalypse alone is hardly worth it.