I know, I know: where we last left the recaps I was still busy getting beautiful, and now I’m talking about something from the reception? Fast-forwarding right through important parts of the wedding story like THE CEREMONY?!!  But don’t worry, I’ll get back to that stuff. It’s like a Tarantino film up in this blog.

Remember way back when I’d first gotten engaged and I was worried about my wedding being an avocado fridge?  I have an unfinished draft of a follow-up post called “Avocados are delicious” which basically recants that old position and embraces all the signs of the times that were finding their way into my wedding.  My asymmetrical wedding dress, my wide-net veil, the donuts, and so on.  I loved all these things so much that I really don’t care if they will make my wedding look dated in a few years.  I was a g-d history major, shouldn’t I find these tokens of the zeitgeist charming and wonderful?  Yes. Yes I should.

So it is perfect that my wedding had a flash mob, because if there is anything that encapsulates our Cultural Now on the cusp of these two difficult-to-name decades, it is a bunch of people doing the same thing at the same time to surprise and entertain those not in the know, in particular, those surfing YouTube.

But YouTube viewers have an advantage.  The titles of these videos almost always include the words “flash mob.” In real life, when a flash mob happens around you and you’re not in the know, the primary emotional response is deep confusion.

We were making the rounds between courses of the dinner, and I was talking to one of Collin’s second cousins when “that Black Eyed Peas song they wrote for bar mitzvahs” came on, and she said, “I’m really sorry to interrupt, but I have to do something right now.”  I respectfully let her go, and started chatting with my new spouse, when I saw some women from Collin’s family on the top of the stairs doing some sort of choreographed dance.  As you can see in the video, it took me a full minute to recognize that the rest of the room was doing it too, and only then because Collin’s Uncle Dave pointed it out to me.  And I spent the next minute after that going “wait, what? wait, what?!” [Truthfully, it's extra confusing when the flash mob consists of [REDACTED RACISM] amateurs who can’t really follow coreography.]

But by time I finally figured out what was going on, I was delighted.  It really is something seeing everyone you know dance in formation for you. 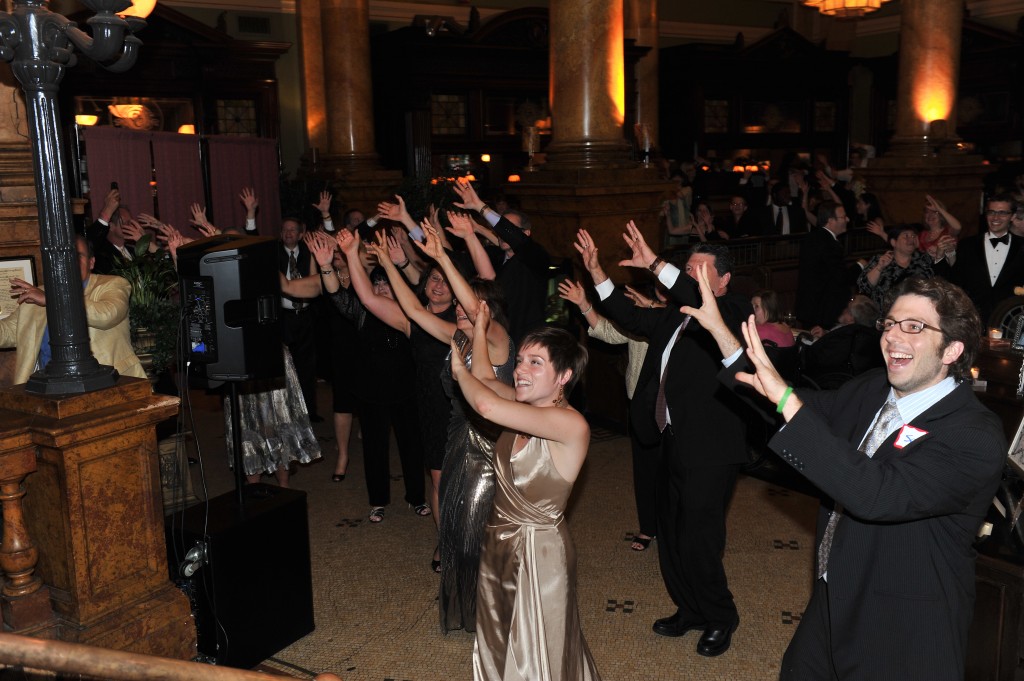 And oh, is it fun to imagine the PLOTTING.  After it was over and we were done hugging, Viki explained how she had sent around an email with an instructional video to all the guests.  Several people offered to forward it to me, but I’ve still never read it [AHEM], so I can only imagine how many exclamation points were in it.  Over/under 300?  I take over.

Photos by Louis Stein; video by Madison Ginsberg, Collin’s cousin who is heading off to film school any day now.  I imagine in 15 years I’ll be at an Oscar night cocktail party bragging about how Madison Ginsberg shot my wedding video.