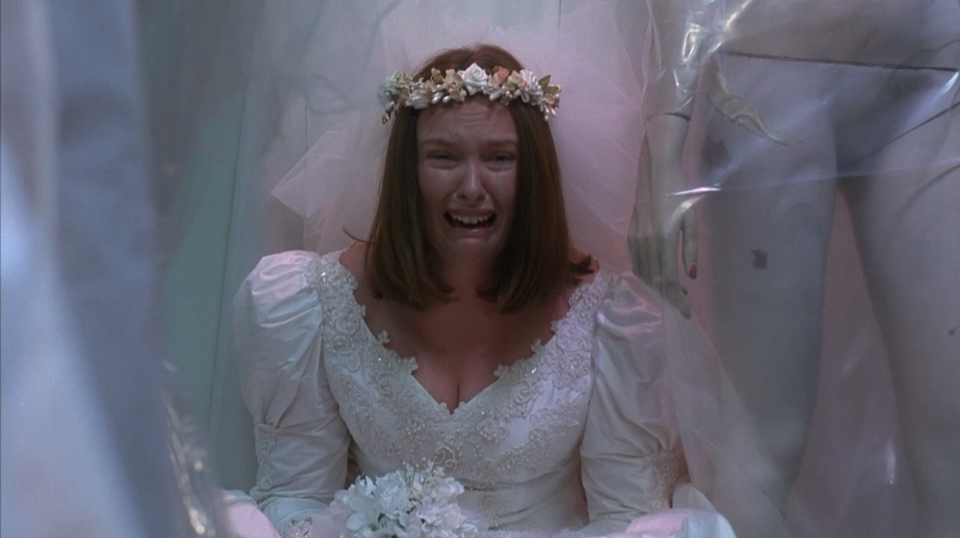 One of the great mysteries of the universe, trailing slightly behind why yawning is contagious and why they even bother to sell single-stuff Oreos, is why ABBA-heavy wedding movies.] There are more jokes in The Bible than there are in Muriel’s Wedding, and about half as much suffering.  The most comedic scene ends with one of the characters announcing, “I can’t move my legs.”

The brutal assault on joy that is watching Muriel’s Wedding is even more painful for a recently-married unemployed person.  One of the chief objectives of the film (after making your soul hurt, of course) is satirizing (wait, no, that implies comedy.  Let’s just say “critiquing”) society’s exultation of bride-dom as the pinnacle of womanhood.  Muriel is a through-and-through loser at the start of the film, an unemployed pathological liar who steals form her parents and is publicly dumped by her group of mean-girl friends.  She stares at the window display of a bridal shop like the Little Match Girl spying on a Christmas feast; it is her vision of a better life.  Even as Muriel starts to sort her life out, she still escapes into bridal fantasy, scamming every shop in the phone book with made-up tales of family hospitalizations so she can get Polaroids of her wearing wedding gowns.  She accepts the offer to get into a Green Card (or whatever the equivalent is in Australia) marriage with a South African Olympic hopeful who can’t make his own country’s team, gleefully happy to be a bride even with a groom making this face at the end of the aisle: 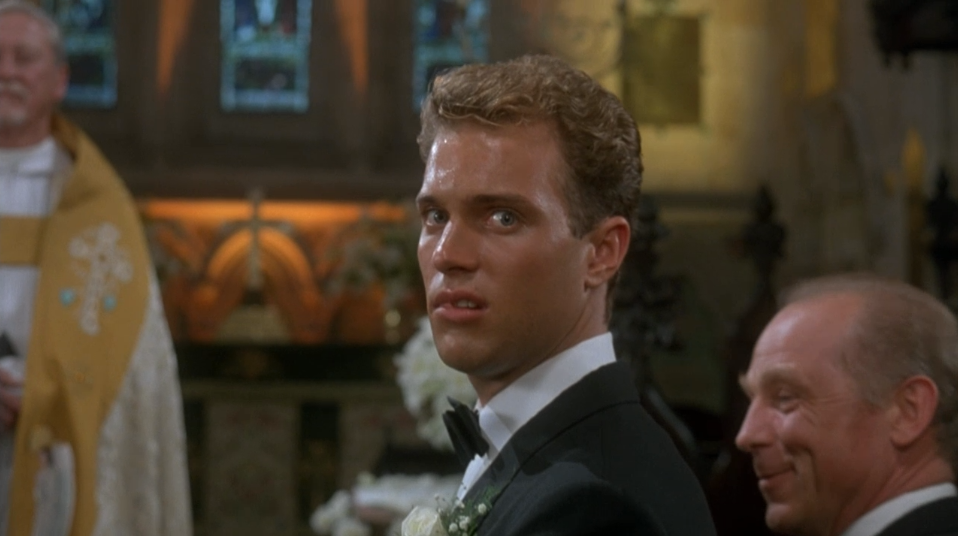 Muriel thrives off the hope these fake engagements can offer, and the societal validation of “I’m getting married” as proof you are living your life correctly.  But the film presents the state of being married as miserable, lonely, and rife with infidelity (Muriel’s father leaves her mother for another woman; the groom of one of Muriel’s Mean Girls bangs a bridesmaid at his own wedding reception).    Once you are married, other men can’t want you anymore, and your husband won’t want you anymore, so you are worthless as a woman.  After being left, Muriel’s mother starts stealing and lying just like Muriel did before her engagement transformation; being “marriageable” is damning even to a woman who has already been married and had a family.

But the film offers a way out of this trap: personal fulfillment through love of oneself and true friendships.  Even though it takes several fake engagements and a fake marriage to complete Muriel’s journey to self-actualization, what sets her in motion is becoming friends with Rachel Griffith’s Rhonda, a fun-loving sassy bitch who can stand up to the mean girls give the best ABBA lip-synching performance in the Southern Hemisphere.  [Rhonda is pretty much the platonic female friendship version of a Manic Pixie Dream Girl, but I find the archetype much less obnoxious in this context, which maybe isn't fair.] Even after Rhonda is beset by illness, Muriel loves her, because, “When I lived in Porpoise Spit, I used to sit in my room for hours and listen to ABBA songs. But since I’ve met you and moved to Sydney, I haven’t listened to one ABBA song. That’s because my life is as good as an ABBA song. It’s as good as Dancing Queen.”

By film’s end, Muriel is the one saving Rhonda from a joyless life in Porpoise Spit, having come to realize that marriage is not the ABBA song at the end of the rainbow she can now truly find her bliss living in Sydney.  If you are still capable of feeling hope after watching all this misery and misfortune, your heart might lift as the credits roll.  But that feeling could just be relief that it’s over.