I watched the US Presidential Election from the distant vantage point of Cape Town. It would have been better for my sanity, my jet-lag recovery, and my liver if I’d just gone to bed with Collin before the East Coast polls closed, but once I in, I was IN. Haunted by memories of 2000, I couldn’t go to bed without knowing who’d be president next year.

Even though, with our new extra hour of time difference (South Africa doesn’t do Daylight Saving Time), that meant an “early” 11:15PM EST call for Obama happened at 6:15 AM on Wednesday for me. 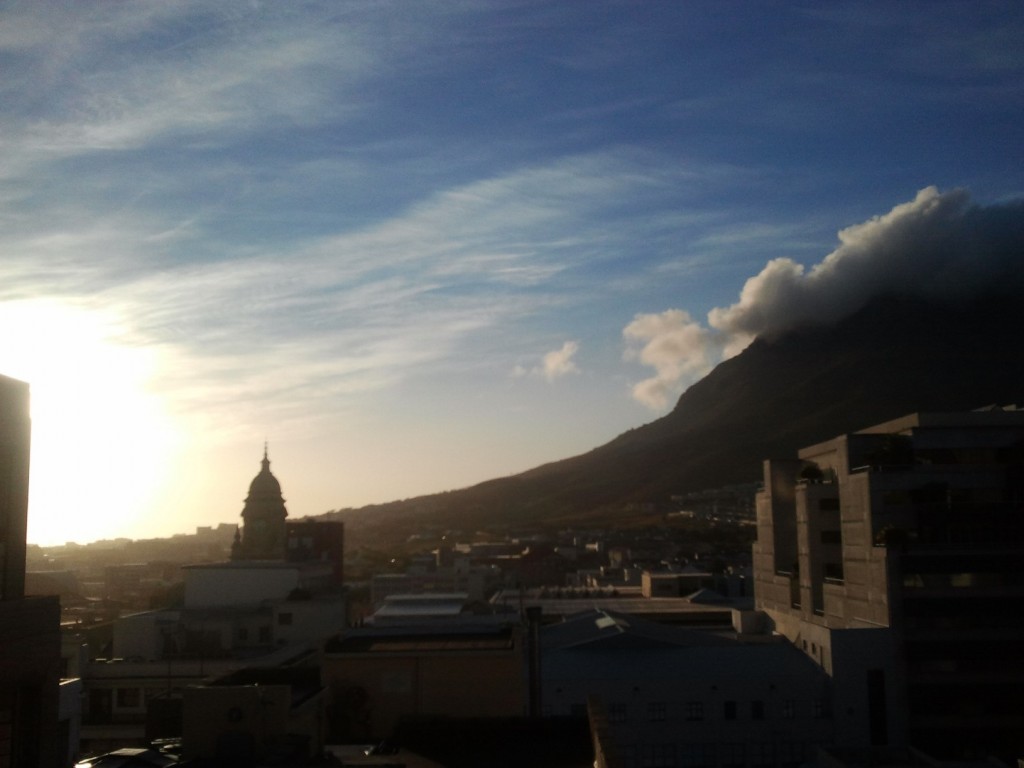 Hopey Changey view from our balcony a few minutes after they called Ohio.

But it was a long road to called-victory, and even I couldn’t soldier on to the point where Romney actually conceded and they candidates gave their speeches.

When our election night began, it was still only 10:00AM on the East Coast of the states, but we switched to CNN International anyway.  They were basically offering a primer on American politics to confused International viewers, running segments that might have well been called “The Electoral College: No, Seriously” and “Top 10 Reasons You Should Be Glad You Have a Prime Minister instead of a President.”

This coverage seemed odd to me, not only because it was by and large coming from American (or at least American-accented) reporters, but because it assumed that the audience for CNN International on America’s Election Day is mostly confused Citizens of the World instead of desperate Ex Pats, which isn’t what I would expect. But it’s not like I’ve done market research on the subject, and I’m guessing they have.

As the night went on a bit (but still hours before anything newsworthy happened in the states), we started seeing foreign correspondents at Election Day parties around the globe.  They all seemed kind of drunk, but I wasn’t really in a position to judge them at that point.

Collin went to bed just before they switched over to good old American CNN’s feed, which was still an hour before any of the polls closed.  I told myself I’d stay up until they “called something important” but quickly realized that was a) probably not going to happen at any reasonable hour b) probably a lie anyway.

I stress ate. I drank too much. I clung to Twitter like a lifeline. I wondered if I was only able to stay up because of jet lag or if I was ruining my progress in getting past my jet lag.

When I woke up in the middle of the next day, still exhausted, the US was sleeping off their celebration, and I had to wait a few strange hours for news coverage on all the additional issues of Election 2012 (gay marriage, weed, Puerto Rico, possible 20% female representation in the Senate).  I felt further away from home than ever, which is saying something.

That’s the story of my first Election Day abroad, and hopefully my last.