Apartment hunting is one of my least favorite activities in the best of times and most familiar of places.  The last time I was in the rental market, I had been living in the city I was looking in for five years. I knew all the neighborhoods, their pluses and minuses and relative price ranges.  I knew which rental companies were corporate-fried slumlords and which would take good care of you.

I still rented the third place that I looked at just to get it all over with.

We are feeling pretty jumpy about moving into our “real apartment.” It’s not that our temporary UCT staff housing is so awful we need to get out of it immediately, it’s more that we know we don’t want to stay here permanently and we’d like move out to accelerate and facilitate the process of really settling in and feeling at home in Cape Town.

We had laughed at the apartment listings that promised “New York-Style Living,” wondering if the cultural divide meant they thought that was a good thing, that it meant posh and exciting and all that other crap people believe about NYC, when to us it means “tiny, overpriced, possibly roachy.”    It turns out the truth is somewhere between the two.  The apartments we saw today were tiny and overpriced, but they were also decidedly posh and living in them would make me feel like a fancy woman in a 1980s cartoon, someone who smokes cigarettes through an ivory filter or something, basically, the female baddie in The Chipmunk Adventure minus the creepy incestuous thing she had going on with her brother the male baddie and, you know, the “diamond” smuggling. 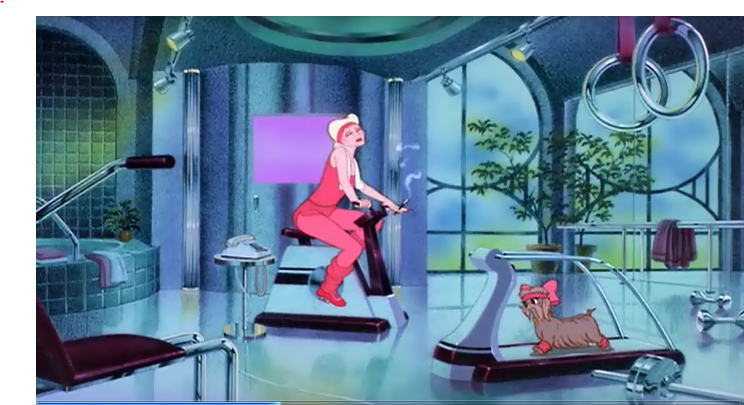 This could be me, but with a cheetah cub in place of the purse dog.

The apartments were all in the center of the City Bowl, in a really busy, lively area that nevertheless felt pretty safe to walk around.  If we lived there, Collin could drive himself to work and I could get where I needed during the day on foot, which seems less stressful to me than having to drive Collin to and from work every day in order to be able to drive myself around in a quieter safer suburb along the coast.  There were tons of cool bars and cafes and street vendors to delight me and let me suck the marrow out of Cape Town and out of life these last few years of my twenties.  These seems obviously preferable to me even if we pay a little premium on the rent to live there… but wait… isn’t that what people are always saying about NEW YORK? Remember how I NEVER EVER WANTED TO LIVE THERE?

Well, I also never ever wanted to live outside of the US, and look how that held up.  Plus, as my New Yorker friend MegEtz pointed out, it will make any subsequent living space feel like a freakin’ castle. And who knows, maybe in two years I will need reasons to look forward to moving back to the States?