A lot of runners will run their mouth off about how great running is because “anyone can do it” and “it doesn’t cost anything.” And then you say “shoes?” and most, but DEMENTEDLY NOT ALL, runners will go, “OK, so you need a good pair of running shoes, but that’s it! What an egalitarian sport.”

This may be true for more ascetic runners out there, but when it comes to hopelessly consumerist material girls like me, it’s pretty easy to drop some serious bank on running accessories.

This is not necessarily a bad thing. I had a great week of training and I think it was at least partially because I was excited to use all the new stuff I had. I turned having put on a little weight into a good excuse to buy a new running shirt and pair of shorts from lululemon, and used the fun of new clothes to get my feet out the door, and the comfort of clothes that fit better to run a little faster.

But the most important stuff-related development in my half-marathon training has been finally figuring out how to deal with my just-starting-to-grow-out-of-a-pixie mess of hair: 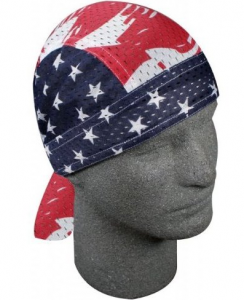 This is called a “Flydanna”

and I believe it is designed with bikers in mind. It works leagues better than a regular bandana because it is shaped like a skull cap that tightens with ties. Bandanas are always not quite big enough for my head and I have to tie these tiny little nubs of fabric in the corners. NEVER AGAIN! Plus, cotton bandanas always become profoundly grody with sweat, this guy is made of good old man-made polyester (they also make flydannas in cotton if you’re a hippie or something). It also has a sweat band built into the edge and I’m generally finding less sweat running down my face, which means less eczema flare-ups mid-run and, in general, a much happier Robin.

Again, I had a great training week and I think at least some of the credit goes to my new duds. I also finally figured out how to get from my house to the Eliza Furnace Trail, fondly known by the locals as the “Jail Trail” because, well, it goes by the jail. I prefer trail running because I don’t like stopping for traffic signals and I’m afraid of being hit by a car, but I was a) bored with the Schenley Park trails b) worried I was getting too used to running on crushed gravel when the half-marathon will be on pavement. So I’m really glad I’ve sorted out access to the Jail Trail, especially for my mid-week speed run because it is nice and flat.

I’m hoping this boost in my mood persists even though I’m starting to hit muscle aches and fatigue as training ramps up. I’ve got my foam roller and tennis ball and Aleve and back rubs from Collin to help too.

Remember, you can donate to my half-marathon charity fundraising campaign HERE.  I’m within $30 of my fundraising goal! Let’s make this happen!