With a little distance from the wedding, it is much easier now to pull out my favorite parts of the day.

I think number one with a bullet was when we read and signed the Ketubah. 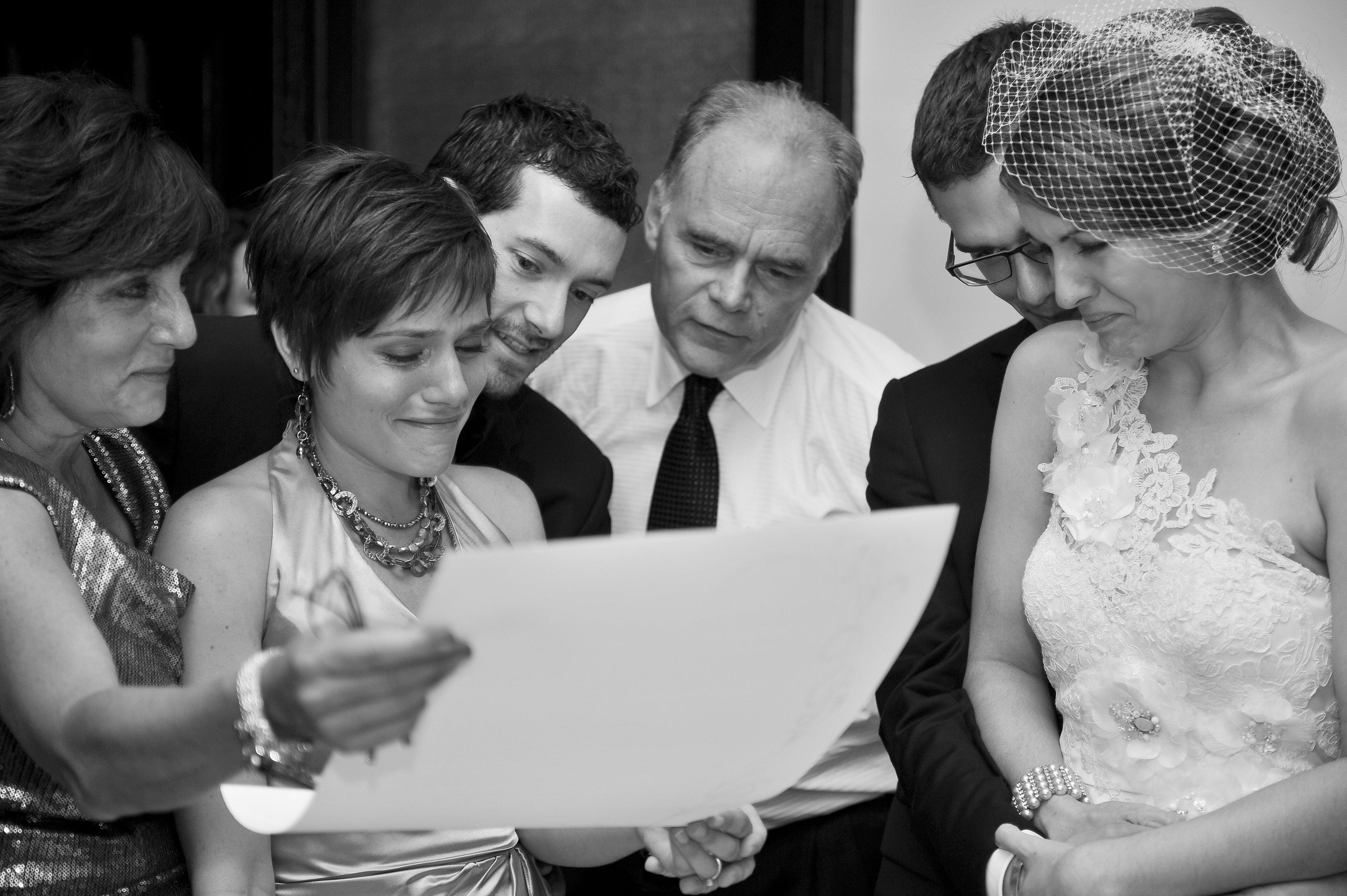 I have already posted this picture, and as foolish as it may seem to compete with the thousand words that it tells, here’s my best effort:

I’ll begin with an abbreviated history of Collin and my religious backgrounds.  Collin is Jewish, and identifies strongly with the cultural side of that heritage but barely if at all with the religious side.  [Zan's excellent Wedding Graduate post reminded me of Collin's attitudes in a lot of ways.]  I, on the other hand, was raised with a Christmas tree but without any religion, and growing up I always felt bereft of the cultural identity my Jewish friends on the Main Line and then my Catholic friends in New Jersey had.  And when my parents died, I longed for the spiritual guidance I could see helping other people through their grief.  I wanted religion. And even before I met Collin, I would joke about how I’d like to meet a nice Jewish boy and convert and raise nice Jewish babies.  [Collin, I promise I did not marry you just because you are Jewish.  But yes, it was in the pro column.]

I haven’t converted yet, and probably will not until we return from South Africa [I just want to convert before we have babies, so there is no doubt (save from all but the most conservative Jews) that our children are Jewish.] But I do my best to live a Jewish life (you know, the ultra-reformed kind of Jewish life where you can still eat bacon and turn your oven on on Saturday and mostly just have to be a good person) and in my heart I already identify as Jewish.  And that was never more clear to me than when my family read our ketubah, because I 100% felt that was the moment Collin and I were becoming a married couple.  The public ceremony a few minutes later was just a recitation.  [Which was of course also awesome, just slightly less emotionally powerful.]

On top of the undeniable awesome heart squeeze of “this is the moment I get married,” reading the ketubah was powerful for me because I was literally surrounded by family and friends, in tight, informal proximity.  Wrapped in Collin’s arms, with all my nearest and dearest a grasp away. 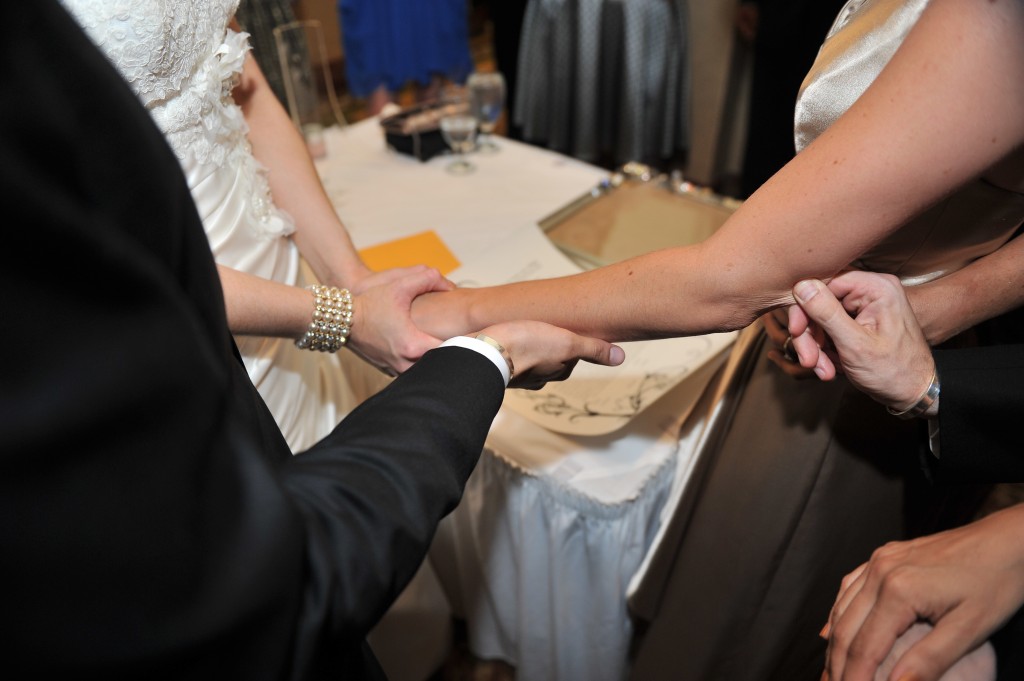 And then there were the beautiful words of the document itself.  When it came time to select ketubah text, I was extremely overwhelmed by wedding planning so my mother-in-law and sister-in-law offered to hunt for me.  We gave them some pretty restrictive guidelines:  nothing sexist and only minimal emphasis on the promise to have a Jewish household (because of the aforementioned ultra-reformness).  They found the perfect text for us. It even uses the word “awesome.”  It’s all about our marriage and our home being wonderful because it is built on our love and mutual respect.  You can read the whole thing here.

And the part of me that drove me to go to law school sure does love that after this deeply emotional moment everyone has to bust out the pens and sign along the dotted line, because it is a contract after all. 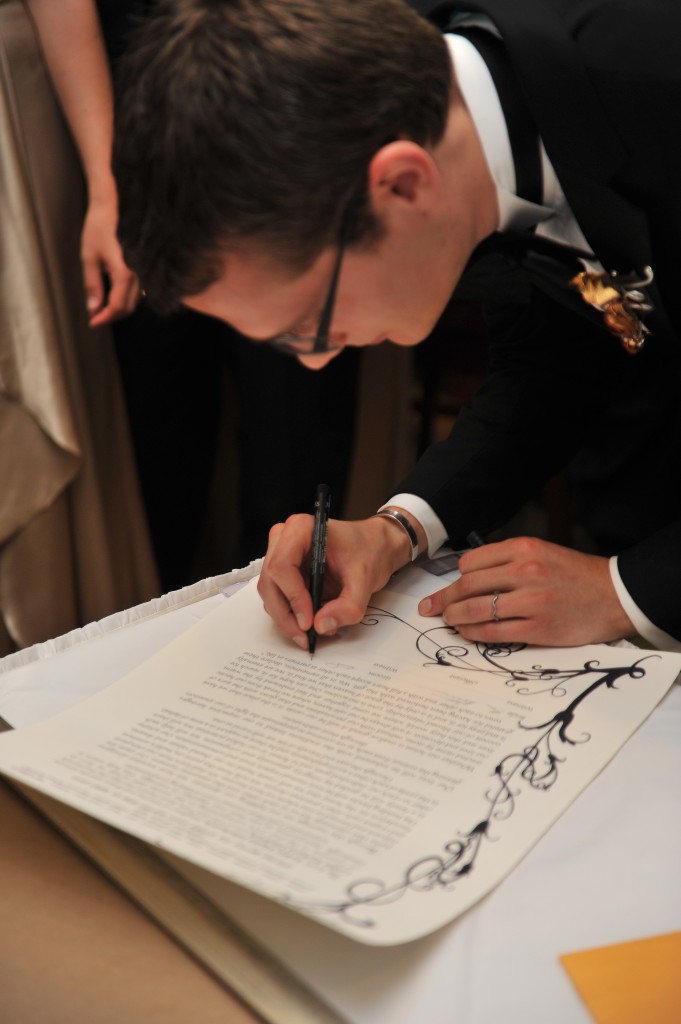 After the signing, my friend and photographer Louis, who is also Jewish, hugged me and said, “You’re married now.”  I whispered back, “I know.” And it was a great feeling. 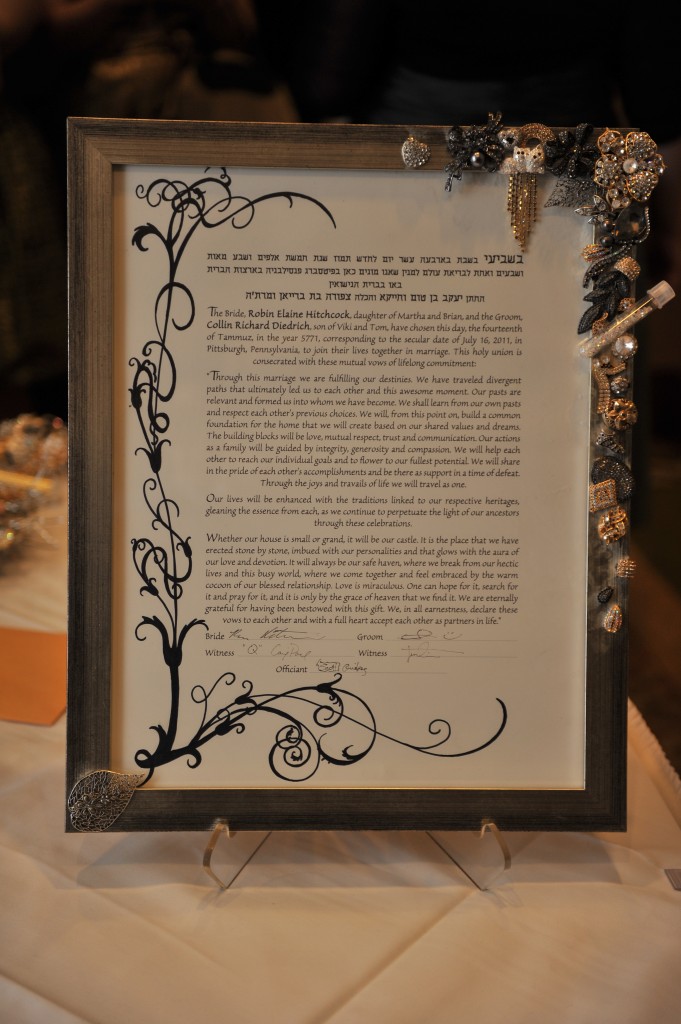 Carrie embellished the printing with the same design flourish we used on our invitations and programs, and Vicki made a decorative frame with some leftover costume jewelry from the construction of our brooch bouquets.  We hang it on our wall with pride and I find myself looking at it at both the best times of our marriage and the hardest times, as a constant reminder of what this all means, and how truly awesome it is.

All photos by Louis Stein.