As I’ve inelegantly noted before, I hardly ever get hit on anymore.  This really shouldn’t matter to me, because the ostensible purpose of hitting or being hit on is to find a new sexual or romantic partner, and part of me and Collin’s marriage deal is that we’re not going to have any of those.  But what can I say, the patriarchy has thoroughly warped me, and I enjoy external validation in the form of strangers expressing interest in banging me.

But then I get dark and tell myself it’s just because I’m not 22 anymore, and I’m not a size 2 anymore, and I cut my hair off and now I look like an old boring lesbian, not even a cute lesbian because chicks aren’t hitting on me either.  And again, I SHOULDN’T CARE, because really, all I’m missing is the opportunity to reject someone, and that isn’t ever fun, but god. I do.  I know it’s lame.

This weekend I went dancing at a hipster bar in a suit and tie.  With my makeup photoshoot-ready and my hair in a fauxhawk.  On the way over I told my friend Liz, “If I don’t get hit on by any lesbians tonight, I just give up.” 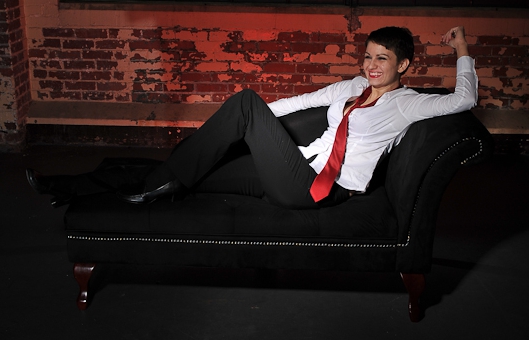 And then I did get hit on by the same chick twice (I think she was drunk enough that she forgot me in between), and I was like, “YEAH! STILL GOT IT!”  And then I got hit on by a series of dudes, one of whom GAVE ME A ROSE (after saying, “I thought you were someone else, so I got you this, but you should have it anyway”).  [So yeah, um, I was apparently getting hit on at least half the time out of confusion, but I'm not going to let that bring me down too much.  This is my pointless point of pride, I make the rules!]

So, the lesson is, if you would like to get hit on at a bar, wear a necktie.  It gets people’s attention and gives them an icebreaker.

And now I offer this subject up to the forum.  Do you married/relationshipped people get hit on less now, and if so do you miss it?  Do you single people want to get hit on more, less, or just less creepily?  I ask not only out of curiosity, but as a resource for some of my single friends who are genuinely perplexed as to how to appropriately approach an attractive stranger in a bar.  Tell me your best stories of being hit on and hitting on others!  Anonymously, if you wish!

Has anyone told you lately that you’re beautiful?