[This post has been in drafts all week while I have searched for my camera charger, because I thought it would not be complete without a visual aid of my actual feet in the actual shoes in question. But I am tired of looking for my camera charger, feel guilty about the low-content posts I've been putting up this week, and figure no one really wants to look at my hideous finger toes anyway. So spritz some water on the dried-up husk of your imagination and let the words form a picture in your mind's eye.]

First, I learned that bridal shoes aren’t all bad.

But then I learned that most bridal shops don’t carry shoes anymore. CURSE YOU, INTERNET!

So I returned to department stores. I tried on a bunch of peep-toe shoes that in my imagination would be more comfortable than anything strappy. But I learned the harsh lesson that these shoes make my stupidly long toes look like they are all fighting for their lives to squeeze through a tiny emergency exit. Finger toes don’t peep, they gawk.

But then I learned that salespeople in shoe departments are incredibly knowledgeable about feet and shoes. It’s a shame the Internet is destroying their job. I look at an ill-fitting shoe and I think, “Well that looks terrible,” but a salesperson looks at it and thinks, “That’s not meeting her arch.” One of these helpful salespeople in St. Louis told me I probably wasn’t going to like the looks of anything without a slingback. I’d been dismissing slingbacks out of hand (or foot, whatever) because of concerns about the back of my heel getting torn up. So he showed me how to identify a good adjustable sling back that won’t do that (basically, the less elastic involved, the better). Moral: go to an actual shoe store and talk to the salespeople. The next generation probably won’t have this luxury. Take advantage now so you can rub it in their face.

With slingbacks back in the game, I quickly learned that I most like the way my feet look in strappy shoes. When I found these bad boys, at DSW for a totally reasonable price, it was all over. If my feet get cut up, I’ll let them heal on the honeymoon, right? 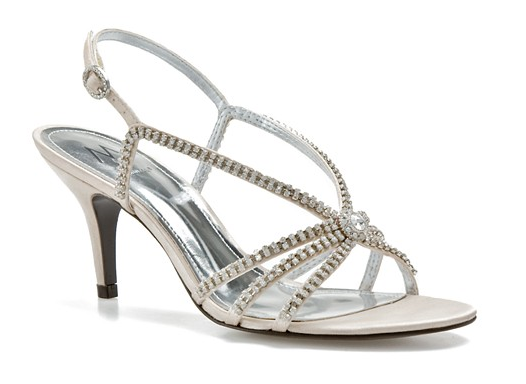 No. Because the last thing I learned is that those foot petal things

are pretty freaking amazing, and they will keep your skin from chafing on the straps of shoes. The miracles of modern shoe science, people!

Final lesson about shoes? Shoes-without-feet-in-them pictures are bullshit. Wait, I already knew that. But I have a new reason for thinking it: I’ve been occasionally wearing the shoes around the house, especially while playing Just Dance on the Wii, in an effort to break them in and be sure they aren’t going to cut my feet. And sure enough, they now have those little toe indentations and sweaty smudges the way that shoes that have been worn EVER tend to. Which must mean there are brides out there not breaking in their shoes for the sake of an “arty” photograph of their empty wedding shoes. What. The Hell. Ever.