The Knot’s newsletter this week is “15 First Dance Songs (That Haven’t Been Played at Every Wedding).” This went poorly last time they recycled this topic.  This time, aside from the editorial failure  of the headline promising 5 more songs than the writer was actually able to deliver (I know it’s a three-day weekend and all, but what ever happened to professionalism, Knot?), my biggest issue is they list the song that Collin and I had just decided to use for our first dance.

Well, sort of, they list Clem Snide’s cover, but we’re not afraid of Nico’s nasal drone so we were going to use the Velvet Underground’s original:

Wait, why am I using the subjunctive? Am I really that asshole who is going to shy away from the song she and her fiancé had finally agreed upon as the first dance song at their wedding just because The Knot is recommending it?

Even though growing up I always said it was the most romantic song ever? Even though when I get sad Collin sings it to me, except he can never remember the tune or the exact words so he basically improvises a new song about mirrors every time?

I don’t want to be that kind of snob, who can’t like something just because it is popular or co-opted by The Man.  And I can assure you, were not for this blog entry, when Collin and I started our first dance, people in the audience would have thought, “Awww” or “What is this song?” or both, not, “Someone’s clearly been reading The Knot!” [Now, of course, people will think, "I remember when she wrote about this on the blog!" which is a general problem with my wedding I'll have to discuss in more detail in another post.]

Choosing a first-dance song because The Knot tells you it is original or hip is lame, but I feel like avoiding said songs when they are personally appealing to you is just as bad, if not worse.

Or maybe I should take this as a sign that we’re making a terrible choice, given “I’ll Be Your Mirror”‘s company on the list. “Dog Days Are Over”? Soooo two years ago, guys. “When the Stars Go Blue”? Was incorporated into the plot of One Tree Hill as a song written by the characters, and no amount of effort resisting snobbery will steel me to that kind of cultural association. “No One’s Gonna Love You”? That sounds like an abusive relationship.

I could go on, but I’m just encouraging my awful snobby side that makes me second guess all my choices and is bad for karma, anyway. And I know I always say I’m grateful to The Knot for the blog fodder, but I think I need to stop reading it for my mental health.

So I’ll leave you with the best thing music snobbery has ever brought me, a funny picture of Collin: 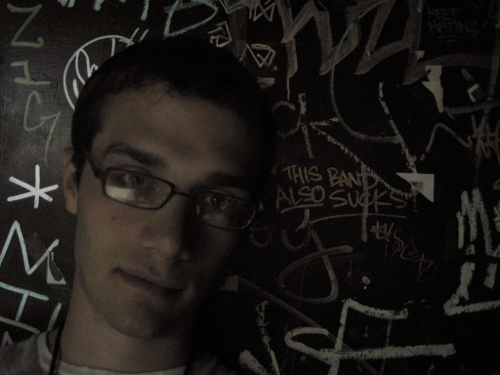