I met most of my friends at a comedy show, but I’ve always been one of the few non-performers in the group.  They are a bunch of hams prone to diverting conversations into improvised bits and one-liner one-upsmanship, and I’m usually laughing too hard to get in on the joke-making.  So despite nearly all my friends being comedic performers in one way or another, despite my years of service as a one-woman laugh track for the Pittsburgh comedy scene, I never saw myself doing what they do.

So how did this happen? Honestly, I’m not entirely sure, but my best explanation is that I got so carried away as a cheerleader for Abby and Liz that I ended up on the field with them.  Abby and Liz had been talking about forming a troupe together for years, and I had been begging them to do it for just as long.  As an audience member, and as a feminist, I wanted to see more women in the Pittsburgh comedy.  But more than that, I wanted Abby and Liz to put on a show because they are the funniest people I know.  Which is really saying something.

Eventually I figured the easiest way to force Abby and Liz to put on a show was to start writing it for them.  [Which, it must be said, I wouldn't have ever thought to do without this blog and its apparent ability to make my readers laugh. So thank you all for the confidence boost.]  I wrote them material with the attitude of, “if I can come up with this, imagine what YOU GUYS can do.”  It worked.  Abby and Liz started shifting their sketch and character concepts from ideas to execution.  And when the stars finally aligned such that we all had the time to actually pull a show together, we found that we’re a really great team.

We each brought something different to the table, both creatively and professionally.   Abby creates bizarre and loveable characters (e.g. the Monongahela Mermaid).  Liz writes sketches so clever the concept alone is enough to make you laugh (e.g. “Home School Reunion”), and hits the promise of her premises every time.  Her sketches are like micro-plays, with compelling character development and riveting plot arcs.  I counterbalanced Liz’s high-brow comedic genius with absurd, ovaries-to-the-wall, let-us-entertain-you sketches with full-on musical numbers, dance routines, and even a magic trick.  The three of us were able to collaborate extremely well, editing and improving each others’ sketches without hard feelings and only one or two (ok, seven or eight) hour-long debates over single lines of dialogue.

Abby had the comedy connections, theater-running experience, and marketing-genius to get us a performance space, press coverage, and a huge audience.  Liz’s own theater experience helped make our show as professional as possible; and she also functioned as  something of a conscience for us, nixing some outlandish ideas that might have scuttled the show.  And I routinely served as a fire under our collective asses to make sure the show really happened and was as rehearsed and polished as it could be.

On stage, I knew Abby and Liz have the chops and charisma to make the audience laugh even with the weakest material, so with what we had the show was sure to be a home run.  I did my best as the straight woman, drawing upon my natural ability to furrow deeply.  Abby’s connections brought us two incredible guest performers, Keara Kelly and Kristy Nolen, who allowed us to keep improv in the show even though I can’t do it, and got some of the biggest laughs of the night when they appeared in sketches.  Finally, we were blessed with the collaboration of Addi Twigg, whose stunning voice provided our theme song and several musical interludes, and whose brilliant omnichord stylings kept the show flowing during scene changes.

And that’s not even mentioning all the people who helped us put the show together by appearing in videos, lending props, running tech, writing music, taking photos, providing graphic design… who amount to roughly 10% of the population of Pittsburgh.  It takes a village. 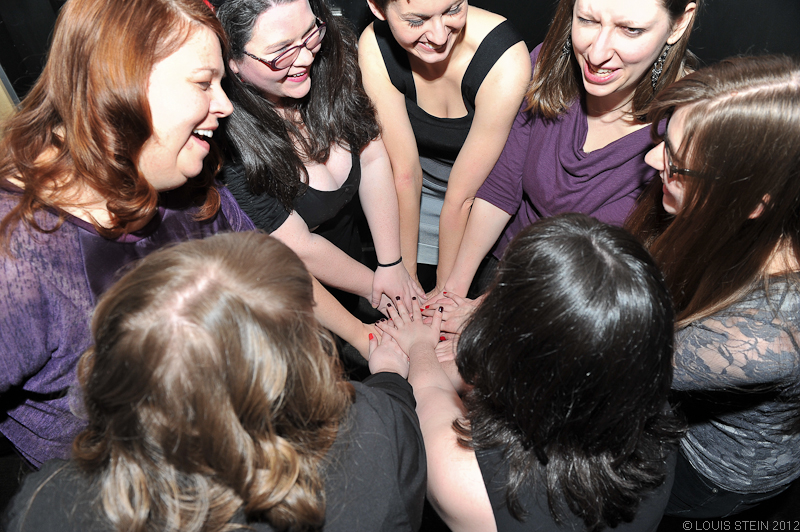 I am extremely proud of the show we put on.  I’m proud that we entertained an audience of 175 people.  I’m proud that we showcased a group of six funny and talented women.  I’m proud that we proved women can write a comedy show without it being “all about tampons and eyeshadow” (to quote the concern of my dear friend Louis), and without it being all about how horrible other women are, while  still letting our ladyness inform and shape the material.  The all-male and mostly-male troupes that dominate Pittsburgh comedy aren’t going to write sketches about birth-shaming or ten year old girls practicing dance routines in their basement.   You’re rarely if ever going to see two women in a scene as fellow astronauts.  You’re going to see lots of men playing women and hardly any women playing men.  But not with Frankly Scarlett.  Being an all-female troupe isn’t just a gimmick or a political statement, it’s a way of giving audiences something truly different.

So here’s to the auspicious launch of Frankly Scarlett, and to the many laughs to come.  After all, tomorrow is another day.